The other i7’s are the 8650U and 8550U which are quad based mobile processors, and as such have a lower base speed for 1.8Ghz and 1.9Ghz. They operate with a slightly lower cache at 8MB

Processors are hard to come buy at the moment. Scan and Ebuyer are listing - but Amazon’s global store seems to be the best bet. 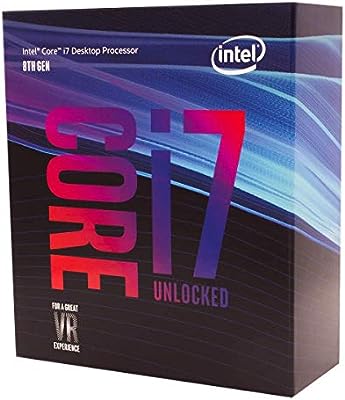 Personally, of slightly more interest is the new i5 range. The 8600K in particular, but also the 8400. They both have hex-core processors like the top i7s operating at a similar speed but with a lower cache. (9mb)

Finally, there are the i3’s - which are labelled as 8350K and 8100 and operate with quad cores and a base frequency of 4Ghz and 3.6Ghz respectively. There is no turbo.

Pricewise, there isn’t much between the 8400 and 8350K - So I wonder what the point is - I’m guessing the i3 will operate better in single-core application… where are the 6 cores for the 8400 would better suit home servers running VMs… again - would be good to see benchmarks.

All the processors support Intel Octane Memory, include Intel UHD Graphics 630 and require an Intel 300 Series Chipset on the mobo.

*Spec and information correct at time going to press. E&OE.

Ryzen build would be best bang for the buck still

Ryzen build would be best bang for the buck still

My next build was going to be Ryzen - especially one of the new 8-core chips… but benchmarks I read don’t look at the favourably.

Be good to see some direct comparison…

I think the 8700k is an excellent alternative to the 1700x. Better single core performance and similar multithread performance too. The new 8400 looks excellent too, great value. You only need those 2 extra cores of the Ryzen alternative if you do lots of stuff on the side, but the hexacore seems like a nice middle ground.

Lots of people reported problems with Ryzen in gaming, lower performance then expected in newer titles due to the neglect of optimisation for Ryzen. Some had trouble in the early days with video encoding and rendering too, but thats seems to be patched. Surely will be better in the future but right now?

For my mini itx build I made 2 months ago intel was actually cheaper (i5 7600) then AMD, also lack of mini itx boards for Ryzen. I prefere stability and right now Intel is doing a better job, AMD catching up though. However if you look mainly for work stuff, video encoding or productivity Ryzen is better it seems, but the price gap isn’t as massive anymore.

Well ask Flexx if it is good he has a ryzen build now. I believe that the new intel stuff will need optimization just like everything else. The cost of the mobos on the ryzen side are cheaper I believe. If I was doing a new build I would go high end Threadripper.

Well the problem here is that Intels architecture didn’t change massively in the last years, making optimisation far more straight forward. AMD on the other side is a completely new beast, doesn’t matter if Threadripper or Ryzen. It will take some time until their performance and stability is completely “unlocked”.

A Threadripper build would be awesome, but would be pretty costly too. A highend Ryzen build is far more affordable and plenty strong for most “home” applications.

Looking at charts from this article from Tom’s Hardware it gives a fairly good feel where the current range of CPUs stack up, albeit, for a gaming environment.

Bang for buck on the newer games on the market, an overclocked i5 7600K @ 5Ghz seems the best - of course, you’d spend more out on WC’ing the crap out of it. The 8th Gen Intels seem a sensible increase from the 7th Gen i7s - not worth upgrading if you own one already, but if you were building new, 8th Gen seems a sensible choice.

Ryzen 7 1800X is vastly overpriced - although it is 8 core, so I guess in other circumstances, it’d out perform the intels. maybe.

Well in gaming you do not need an 8 core or even a 6 core at the moment. It is missing the 1700/1700x completely(this is the one most people actually get). What are these prices based on? If they are missing platform cost such as cooler + mobo + memory then this is pointless.

I think it is based soley on CPU price - I get what you mean… a CPU might be cheaper than another, but if it requires a specific chipset that is only available on really expensive motherboards, then the savings aren’t genuine in the overall scheme of things… but you’ll only ever know that on a case-by-case basis depending on individual needs.

At £259 it’s on the juicier end of the CPU market, but is that right? 8 Core, 16 thread running at a TDP of only 65 Watt ?? - That seems awesome for running a home server - would be piss easy to keep cool and with all those cores, great for VMs…

The Z270 boards are fairly cheap, I actually found that the new Rzyen boards were slightly more expensive at least here in Korea. The new Z370 boards however seem more expensive. Right now its hard to say, the 8700k are sold out everywhere and the motherboards are barely available yet. Still, 160-200 bucks for a pretty well equipped motherboard isnt too bad.

Yeah the Ryzen 1700 is pretty sweet, that was my initial idea for the mini itx system.

Yeah - That sums up how good a 65w chip is. Kinda strange - because in the past I wouldn’t have given a damn about thermal efficiency – but these days, CPUs are much of a muchness… so if its the difference between sitting next to an oven or a cool breeze. I choose cool-breeze.

I usually look more at the power consumption these days. But that is pretty good if you want to run some VMs or a bit of rendering. OK, now before people say that you do not use this stuff for rendering… most of the applications that are free are not well optimized for GPU rendering and the CPU makes a massive difference.

Having a look at the WAN show from Linus techtips on youtube. The 8700k benchmark results seem to vary and it is pointing to motherboards not being optimized yet. So same story as with Ryzen in the beginning.